He is collecting autographs of the Japanese professional baseball player (including alumni), mainly Yomiuri Giants player.
His name, age, job…everything is not open to the public..
All the parts about the concrete method were deleted or revised by his own will so that it should not interfere with his activity.
Although I feel something lacking, I believe that the actual collection will talk eloquently.

I will omit honorific titles of all the professional baseball players as public figures. 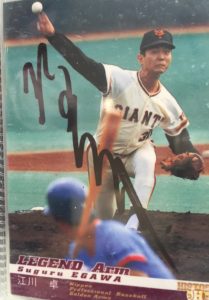 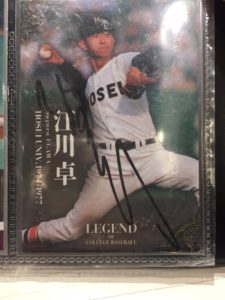 Masaichi Kaneda joined Kokutetsu-Swallows in 1950. In his 20 years as a player, he had 400 wins, the most victories in the history of Japanese professional baseball.
Pitching appearance: 944, Pitching a complete game: 365, Balls thrown: 5526.2, Strikeout record: 4490. The unprecedented record will never be broken in the future.
In both baseball teams which he belonged to, Kokutetsu-Swallows and Yomiuri-Giants, his uniform number 34 is a permanently retired number.He also was an manager, and founded Meikyukai (:an excellent ball player’s association) and has been called “Emperor of the baseball world”.And he writes almost no autograph.

“Give my autograph to you? I won’t write it.”
The great pitcher well-known for scattering fans with a fan was very brusque that day, too.
“Please! I want your autograph by all means!”
Mr.Sasaki appealed feverishly, but Kaneda looked away and fanned himself briskly.However eagerly Mr.Sasaki appealed, there was no reaction at all.
Mr.Sasaki thought that it was impossible.
He thought: it is no longer happy if I keep on.Not only for Kaneda. But also for me.
When he gave up and was about to leave, suddenly, Kaneda said, “Hey, hand it to me”.Mr.Sasaki, surprised, held out the card for autographs, and the great pitcher wrote his signature quickly with characters full of energy and returned the card. He was blunt, but it was not an unpleasant feeling.

・・・Oh,  this person is actually very gentle at heart.
Unexpectedly, Mr. Y became full of a happy feeling.
He came to love Kaneda all of a sudden.

OK! I did it! It’s possible, isn’t it?
Kaneda is a good person, isn’t he?
The feeling of accomplishment to have dropped an impregnable fort.

Once a person captures chance, it’s natural for him to carry on a lucky wave. Soon after, Mr.Sasaki won a signed ball of his really really favorite player, Masaichi Kaneda, in < Dream baseball >. 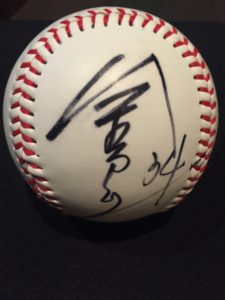 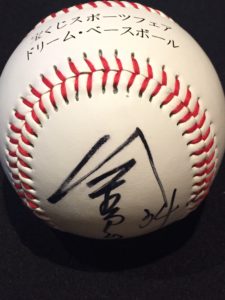 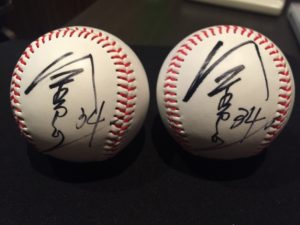 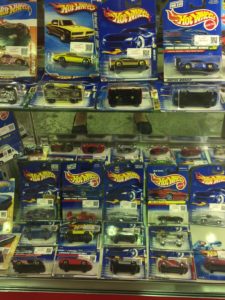 An enchanting view of Mandarake showcases at Nakano-Broadway-Building entrance.
a spacial feature on HotWheels 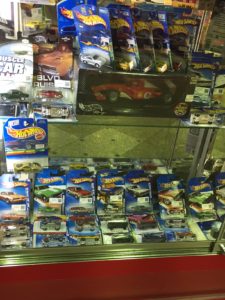 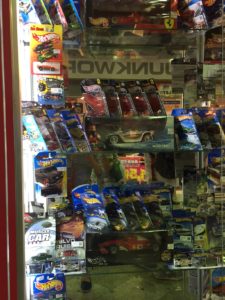