By the way, around 2012, the concert venue of Momo-Clo suddenly became larger and the audience increased. And with this, the autograph rate decreased.
In 2012, it was said that the manager tweeted “an autograph appears at the rate of 1 piece in 25 sets.”

I asked him his record until now.
When he was lucky, he once won one autograph from buying only 3 sets. Three times, he won one in 10 sets. But unfortunately, he drew nothing in 50 sets two times. In addition, nothing in 100 sets once, he said.
“100sets?!”
I unintentionally clenched my fist and hit Mr. Ikeda.
“I submit contentedly. Please.”
Obediently he lowered his head and I took this chance and hit him again.

Mr. Ikeda muttered in a low voice.
“Generally, when a seller sells it by the bundle of photos in one time, an autograph appears at the average rate. But when he/she sells each set separately, the rate of blanks increases. If we buy it by a mail order, the rate is close to the average. But I want to buy it at the merchandise counter of the venue.”
“Why?”
“The emotional uplift is excellent!” He said with sparkling eyes.
“Their own handwriting! Written by herself! Just after it, the live performance starts! The festive mood rises to its peak! ”
Mr. Ikeda carelessly forgot about his situation, and he returned to his eager tone all too quickly.

“Ore-no-Fujii” is the event at which all the girl’s idol groups of Stardust co. gather together in the beginning of the year.
Momo-Clo participated in this until 2016 (as of 2018).

The official photographs exclusive to this event were sold in 2014 and 2015.
In 2014, they were snapshots where the members of various teams were mixed.
The event in 2015 was called “The seven days battle between Fujii and his wife” and continued for 7 days. On the 6th day, “My Top Ten” which was to decide the top ten among all the units and solos among the groups was held and special photographs were sold.
Solo shots for Momo-Clo (2 kinds each for the five members), Shiritu-Ebisu-Chugaku (2 each for the eight members), Team Shachihoko (2 each for the six members), Takoyaki Rainbow (3 each for the five members) were sold, totaling 53 kinds.
Five pieces sold as one set.
The autograph appeared about one piece in five sets. It was a high rate, but people didn’t necessarily get the one they wanted.

“It was super hard to win a photo of Momo-Clo with an autograph. I think that they could only “loop” up to around five times even if they lined up at the head of the line.”
“What’s “Loop”,” I asked.
“It’s to line up over again. Because we can buy only up to five sets, we go to the end of the line and line up from the beginning.
By the way, I did Loop three times on that day, and win four pieces of autograph. But there was not a Momo-Clo’s autograph among them. Moreover, we could buy only three sets at most near the end.”
Mr. Ikeda deplored.
“Ah, if only I had taken you to the concert that day! If the two of us had lined up, I might have been able to win Momo-Clo’s autograph.”
What awful things he does say in this delirium?
“But that’s alright,” Mr. Ikeda said and opened a folder.
“This I traded, and this I was given by ○○kun. See! I have a lot of them.”
The “seven days battle” photos with Momo-Clo’s autograph were put neatly in the folder.
“Do you want to look at them?” Mr. Ikeda said, smiling.
“No, enough of it for today.”
“No, look!!!”
I left him crying for me to look at them, and hurried away.

In 2015, Reni Takagi solo concert.
In 2016, solo concerts of each member became all-out.
Aarin held a solo concert called “AYAKANATION” at Yokohama-Arena in 2016 and at Ryogoku-Kokugikan in 2017.
Official photographs were sold in both days.
(There were official photograph sales at Momota and Tamai’s “Momotamai-Kon” Concert in 2016 as well.)

Mr.Ikeda says.
“There are other photos like supplements to a magazine, a present in a drawing, and those distributed at an event.

On the back side of the official photos, some tiny lettering appears.
At first, it was said that photos came with an autograph when it had lettering in one line and none when it was in two lines.
In the first edition, they seemed to write autographs intentionally on photos with one-line lettering. But after reprinting, the opposite phenomenon sometimes appeared, and some people exploited that to make fakes.
Lately, all the lettering is in a single line and it is difficult to tell a genuine autograph from a fake one by its backside. 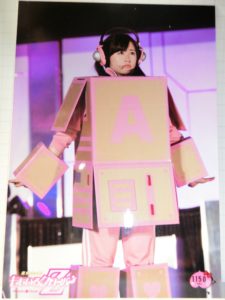 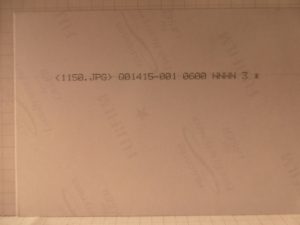 the back side
（one-line lettering, without autograph）

As is unavoidable for any kind of autograph, some people forge autographs of Momo-Clo and sell them.
The imitation reached a peak during 2013 – 2014, Mr. Ikeda said.
“I couldn’t distinguish them in those days and I bought whatever I could find on the Internet. It is hard to tell the difference of those images on the Internet, after all.”
He seemed to have paid a very high learning fee.
He said,
“I can considerably distinguish them now. I know the fake style of four or five. And as soon as I see it, I can tell that this is made by A group, or that is made by B group.”
“Ohhh.”
I wonder how many stupid bitter experiences he has had to reach this stage.
He said.
“In the past, I figured it was a fake the moment I saw the envelope. Believe it or not, the handwriting of the address on the envelope was the same as the autograph of the photo.”
“You were cheated into buying such a thing?”
“No, I was not cheated but I went to catch it in the face of danger to study for myself.”
Mr. Ikeda denies it with every effort, but his voice is feeble.

Mr. Ikeda, who had experienced many hardships concerning fakes, complained: “What’s more, Aarin’s autograph is very unstable.”
You can tell from Kanako and Shiorin’s autographs that they are trying to prevent a fake, but Aarin’s autograph differs greatly, Mr. Ikeda says.

“As for Aarin’s autograph, I think I grasp all her styles from every term. But there are pieces which almost want to make me call them fakes if I hadn’t won them myself.”

According to Mr. Ikeda, Aarin’s autograph clearly has “the hurried version” “the careful version” and “the normal version”. In particularly, photos for her solo concert” AYAKANATION” are full of hastily written autographs because she had to write so many herself.
“If I drew a carefully written version at such a time, I would be rather uneasy.”
Mr. Ikeda with lost-looking eyes took out another piece.
“And then, there are ones were the form is too strange. See! This one! If this weren’t one I won myself, I would think it were a false.”
“Well, I can’t distinguish between them at all.”

An autograph is called strange when there is a difference between its form and the general style of the time it was written.
Mr. Ikeda says that he can distinguish Aarin’s autograph from each period.
“The other members scarcely change their form of autographs.
During

The autograph’s rabbit and its ear sometimes grow thinner and sometimes fatter.
I had better refrain from writing detailed information not to give hints to counterfeiters.
While Mr. Ikeda made an impassioned speech about Aarin’s autograph, I looked through his album randomly.
“Oh, Aarin in this photograph, her face is strangely thin. Is this a fake?”
” I cannot understand what you say at all!”

Mr. Ikeda says there are some photos he especially cherishes.
They are the photos distributed in 2010 when Momo-Clo members came to the HMV music shop to hand them out.
On July 1, Ayaka Sasaki came. On July 4, Reni Takagi came. The other members also came to the store in sequence and distributed 50 photos each. The photos are ones especially for this event, and all of them have an autograph, a handwritten number and a comment.

” I don’t know whether the member distributed them in person, because I didn’t go to the scene.”
While saying so, Mr. Ikeda took out two photographs.
“These are the 1st and the 50th of Aarin’s photos from that time.”

Momo-Clo made their major debut with “Ikuze! Kaito-shoujo” (Let’s go! Phantom thief girls”) on May 5 that year. From about that time on, events at which fans could directly interact with the members were not held anymore.

Mr. Ikeda says,
“These photographs from the HMV event are those of the last period when the members directly distributed their photos with autographs. The end of direct interaction events is also the period when they started climbing up the stairs to becoming a national idol group. These photos are both the end and the beginning. It shows Momo-Clo’s history in many layers, which is deeply impressive for me.”

After Momoka’s announcement of withdrawal, Mr. Ikeda worried all the time.
At first, he was shocked by her withdrawal; next, he was shocked by not being able to win a ticket to Momoka’s last concert. And then, he took slight consolation in getting a ticket to the live viewing event.
On January 21st, 2018, Mr. Ikeda and I saw the last live concert at the live viewing hall neighboring the concert hall.

After the concert ended, Mr. Ikeda said.
“It’s all right. The clover, Momo-Clo’s mark, has four leaves after all.”
“I got tickets for two days of The Valentine event. I will go to the tenth anniversary event in Tokyo Dome too. I believe they will manage successfully…”
Mr. Ikeda wiped his tears and took off the green uniform which he wore saying “only today”. He ended up in just black trainers, but in fact, he was wearing a pink T-shirt underneath.

Finally, I should write down a little about myself who stands by Mr. Ikeda and his photo buying.
I don’t know why, but I became emotionally unable to watch TV after the earthquake disaster of 3.11 in 2011.I spent days moping, and it was the Ko-haku Singing Contest on the last day of 2012 that broke my long refraining of TV. At that time, I saw Momo-Clo for the first time. I thought that we still have a future if there are girls like this.
“To make people smile”・・・Momo-Clo is head and shoulders above the others in their sense of resolution and sense of mission.
How heavy it is for the girls to take on this determination as an idol.
I thought that their group of five was permanent, but I was mistaken. A live concert is always only once in itself.
There will be various changes. But the memory they have lit up will be left clearly. I think it is lucky to be able to create more of these memories in the future too.
I was lucky to have come across them in this period. If we meet it, we can’t mistake it for something else. We can clearly identify what is genuine…like a diamond in the midst of ashes. 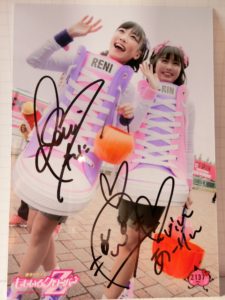